In 1972 I went to live with my grandma Rosita Valdez Padilla in Puerto de Luna, NM. and attended my junior year of high school at Santa Rosa High.

It was not only a life changing year for me but it was also the year that Rudolfo Anaya's novel, "Bless Me, Ultima" was first published. 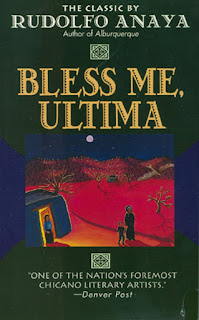 Rudolfo is a hometown hero of Santa Rosa and/or Puerto de Luna New Mexico but by 1972 he had moved on to live in Albuquerque where he would become the Godfather of Chicano Literature, the treasured son of New Mexico. This year Rudolfo became one of the newest recipients of the National Humanities Medal. I can't tell you how cool it was to watch him receiving the awarded from President Obama and while he is leaving the stage he says "Viva Obama!" 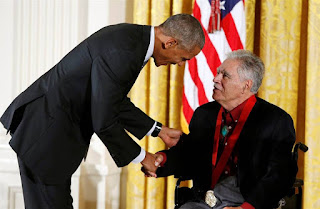 What it must have felt like to be acknowledged by the coolest President we have ever had for playing a key role in weaving our New Mexican culture into American society through his body of work. I only dream of breaking the barriers he has broken by telling his story of the civil rights struggles of Hispanic people of New Mexico. He has given me the courage to tell my story as a female Hispanic woman. By telling his story of Ultima, he helped me to solidify the importance of a boy and his relationship to his wise and aging grandmother who held the secrets of life that only she could convey to him as a young boy before he grew too old to have the time or interest.  I've cherish those times with my children and grandchildren and I feel blessed when they come back and repeat information that I have bestowed upon them. Rudolfo has been a huge inspiration to me. Telling his stories has given me permission to tell my story. I write my blog to keep my very unusually rich New Mexican family story alive. My son told me the other day "Mom, you don't even know how many times a week I brag about the work you do, researching our family history and writing our story." It warms my heart to know that he gets how important it is. If I die without telling the stories, our history dies with me. My brother Phillip reminds me all the time I am the keeper of the stories and the family history. My mother was the keeper. I only wish I had started writing while she was still alive. 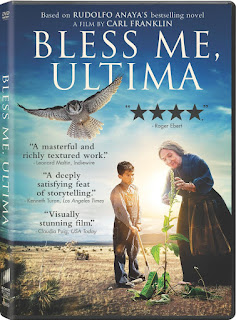 In Rudolfo's novel, six year old Antonio Márez y Luna, tells the story of his grandmother, Ultima who is a curandera. Not only is it the most widely read and critically acclaimed novel in the Chicano literary canon since its first publication in '72 but the story is very near and dear to my heart. It took place in Puerto de Luna, during WWII. My parents were born, raised and married in Puerto de Luna. My father went to war and my mother worked at the post office in Puerto de Luna. Sometimes she would have to close the post office and take a telegram to the families of fallen soldiers on her horse.

Rudolfo explains in this video how he receives guidance from his ancestors.

A Conversation with Rudolfo Anaya by Directed by Lawrence Bridges

It is an amazing thing to have those connections to the past. Sometimes I will being thinking about working on a branch of my family tree. At times there is a missing link to connect one family member to another and all I have to do sit down late at night and my guides come and the information just appears out of nowhere. So that answers the question of do we live forever? Yes. I feeling the presence and blessings of my ancestors when I am working on our story.

Happy 79th birthday to you Rudolfo Anaya! You have been a huge inspiration to me. Your spirit will live on forever in your stories.

COLORES | From Curandera To Chupacabra: The Stories Of Rudolfo Anaya | New Mexico PBS