Eleven days ago on November 8, the unthinkable happened. A man who has never held public office or has never even had to apply for a job became the President Elect of our great country. He was not endorsed by any major newspapers, he wasn't endorsed by any ex-Presidents. He didn't win the popular vote, meaning most Americans didn't even vote for him. So what went wrong? Yellow journalism. Plain and simple. The type of journalism that presents little or no legitimate researched news and instead uses eye-catching, sensationalized headlines and photos to sell more newspapers, air time on TV and radio. I don't agree with such tactics but I understand. The media has been scrambling for a few years to figure out how to make money now that most people get their information online. The result of many reputable newspapers going under is a population that has become accustomed to the exaggerated, scandalous, fear mongering and sensationalism that has made reality TV a part of every day life. If you see it, read it and spread the information without checking for reliable sources, you are in fact part of the problem.

During the 8 year Obama administration this type of journalism has been at it's peak. Trump began his political career by jumping on the ‘birther’ movement against Barack Obama in 2008, stating that Obama wasn’t born in the United States and thus was ineligible to be President. Shortly before the 2016 election, Trump finally admitted that President Obama was indeed born in the United States with no apology of the chaos it created. In the aftermath of years of repeated misinformation of this yellow journalism, people still believe this untruth. 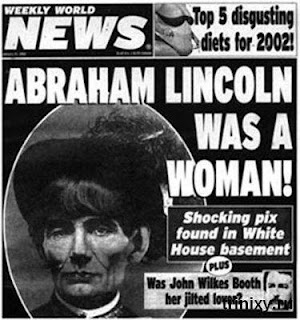 Another example is the InfoWars broadcaster and Trump ally, Alex Jones, who claimed that First Lady Michelle Obama is secretly a transgender woman who murdered Joan Rivers to cover it up. The story originated when Joan Rivers, the comedian known for her lack of self-censoring, officiated a same-sex wedding and was asked by a photographer if she believed the United States would ever see a gay or female president. Her response was typical Rivers. "We already have it with Obama, so let's just calm down," she said. "You know Michelle is a trans and Barack is gay." It was a joke! Joan passed away from a medical procedure shortly afterwards and word spread through the yellow journalism via Alex Jones with a very ugly twist. Seriously? Yes. People that I know really did believe this nonsense. If you google the story and it only shows up on sites like Breitbart and infowars, and not on websites like The Washington Post or NY Times, then they need to be reported.


“If we are not serious about facts and what is true and what’s not, particularly in an age of social media, where so many people are getting their information in sound bites and snippets off their phones If we can’t discriminate between serious arguments and propaganda, then we have problems. If we just repeat attacks and outright lies over and over again, as long as it's on social media, people start believing it. And it creates this dust cloud of nonsense.”    ~ B Obama

As for the smear campaigns on Hillary, the yellow journalists have convinced many that she is a congenital liar. When asked what it is she lied about, most people can’t point to anything specific; they have just been programed to think she’s dishonest and corrupt. The fact that she’s been dogged by political enemies and investigated by special prosecutors, the media and Congress with unlimited budgets and every possible means of getting to the truth and has been exonerated doesn’t seem to register. Indeed, the fact-checkers all find her to be more honest than virtually anyone in politics while Donald Trump, by contrast, lies more than he tells the truth. I noticed during the campaign that every time someone said something derogatory about Trump, he would magnify it and turn it around and use it on Hillary.

If Donald Trump were a newspaper, he would be the kind of tabloid at the grocery store that you want to turn over as to not see the cover. The headlines would be huge 72-point type in red and always include words like “Disgusting,” “Huge,” “Loser,” “Slob,” “Terrific,” “Unbelievable,”  “Stupid,” "Nasty," and “Trump!”  Its stories would be written at the reading level of a third-grader, yet vulgar and packed with resentment, hate, envy and fear. Unfortunately, those headlines of the Trump media tapped in to the very angry left winged America who have hated our black president for eight years.

We all have a right to our opinion. It is the job as artists and musicians to use the 1st amendment to entertain, inform, criticize society in whatever form we choose. It is one of the highest expressions of freedom our nation provides and it allows artists to play a role in the evolution of that society. However, if your have a radio show, a TV show, if you are a writer for a newspaper, it is your job and the job of your employer to inform people that what you say is your opinion. NOT FACT.

The First Amendment guarantees freedoms concerning religion, expression, assembly, and the right to petition. It forbids Congress from both promoting one religion over others and also restricting an individual's religious practices. It guarantees freedom of expression by prohibiting Congress from restricting the press or the rights of individuals to speak freely. It also guarantees the right of citizens to assemble peaceably and to petition their government.

So now we have a President Elect whose relationship with Vladimir Putin is becoming more alarming by the minute. There is now a "Make the World Great Again" billboard in Russia with a photo of Trump and Putin on it. I find this alarming. Why is this not the front page story in every newspaper or the lead-in to every news broadcast? Yesterday Trump was able to settled out of court on a fraud lawsuit for $25 million for his Trump University scam, and it is a tax write off for him. The man he has chosen as his chief strategist is a man who is a known white supremacist, Steve Bannon. This is without question an absolute worst-case scenario.

Meanwhile, it seems that Mccarthyism has returned in the form of Trumpism, trying to blacklist anyone that speaks out against him. Today the media is covering Brandon Victor Dixon addressing Pence at a Broadway show and Trump demanding an apology. In my humble opinion we, as musicians and artists have an obligation to speak up against tyranny! Dixon words were respectable. It was a polite message about love and diversity. A message about respecting all Americans. He read his words from a small piece of paper to Pence after the show while cast members held hands:

“We, sir — we — are the diverse America who are alarmed and anxious that your new administration will not protect us, our planet, our children, our parents, or defend us and uphold our inalienable rights,” he said. “We truly hope that this show has inspired you to uphold our American values and to work on behalf of all of us.” ~Brandon Victor Dixon

Long story short, our country has been duped. He will never be my president. He has no loyalties beyond himself. He displays no empathy or compassion. He learned this behavior from his German immigrant father, Fred Trump, who made his millions as bigoted real estate mogul of New York’s outer boroughs. Woody Guthrie wrote some of his most bitter writings about his two-year tenancy in one of Fred Trump’s buildings "Beach Haven"

I'm calling out my welcome to you and your man both
Welcoming you here to Beach Haven
To love in any way you please and to have some kind of a decent place
To have your kids raised up in.

There is nothing admirable, honorable or honest about him. He has no close friends from childhood. I look at him and there's nothing there to relate to. Nothing.

If you voted for him, you did so with the knowledge of the following and it makes no sense to me. 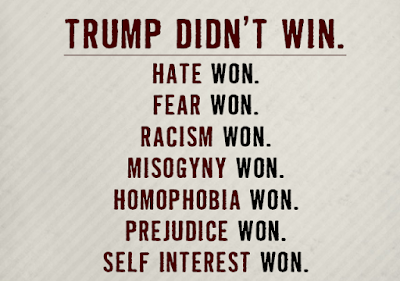 I have been grieving for my country. We have no idea what we are in for. Now is time for us all to emerge from the darkness and stand together for good, for love and for justice. Do what you can every day on a grassroots level, just as our President Obama has asked us to do from the beginning. It is our job as citizens of this country. 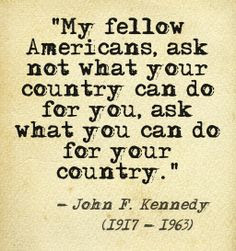