When I began my ancestral journey,  I was looking forward to writing this blog about my Padilla ancestors because it was the branch of my family I knew most about. Little did I know I would discover literally thousands of relatives that I never knew existed. I discovered Padillas on both sides of my family! My dad's 3rd great-grandmother was a Padilla. Not to worry, as you can see on the chart below, there's enough other DNA in the mix to make that safe. 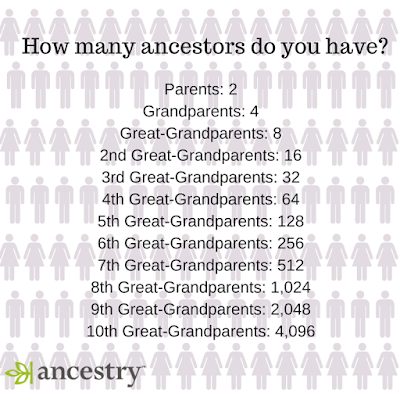 In the beginning of my research, I got stuck on my maternal Great-Grandfather Jose Manuel Padilla because I had his middle name wrong. To make it even more difficult, there are thousands of Jose Padillas in the world. After all of my research, I have concluded that there seems to be parallel family units in several countries with the same surnames as the ones in my family tree. I've discovered multitudes of Padilla, Fajardo,Valdez, Chavez and Montoya families that have married each other all over the world. For instance, I found a Felipe Fajardo who was born in 1883 and lived in Albuquerque. He was  and he and his wife had children named Phillip and Anita. Uh... those are my father, my brother and my sister's names. That parallel family had me very confused for a few days when I began looking for my dad's sister, my Aunt Anita. I thought there may be some skeletons in the closet that I had not been told about. Even now, I only have a couple of photos of my Aunt Anita and no census information on her or my father when they were children because their mother died of the 1918 Spanish Influenza. My father was only 3 years old.

So, my first important discovery was that my paternal grandmother Josefita was a Labadie not a Montoya as I had always thought. She and her siblings had been adopted by her step-father Antonio Montoya so my dad is a Labadie, not a Montoya! This was a BIG find. In that branch of the family tree, my 4th Great-Grandfather Dominique Labadie MD, was born in 1738 in in Veloc, Gascony, France. (in the South of France) He first settled in St Louis, MO. This may have been my family's first connection to St Louis. Then he came to New Spain, Kingdom of New Mexico in Santa Fe in 1765. As a young medical doctor, the 27 year old married my 4th Great-Grandmother, Maria Micaela Padilla, (I love her name) who was born in 1748 in San Juan, Rio Arriba, New Spain, Kingdom of New Mexico. Maria Micaela was the daughter of one of the original founding families of Albuquerque. She was born in 1748, in San Juan, Rio Arriba. They married in Santa Fe on November 2, 1766. and had 15 children. It became very common in the next few years for the young men of St Louis to venture west and marry into the Hispanic families who were rich in land and cattle. She died in 1804 and he died July 23, 1815 in Santa Fe.

I was able to trace that branch of Padillas back to Spain about a year ago but I was unable to connect that Padilla to my maternal branch of Padillas until this week. While doing some research the other night I finally hit the jackpot, in discovering my great grandfather's name was Jose Manuel Padilla. So here is the comparison of my mom's Padilla lineage to my dad's Padilla lineage: 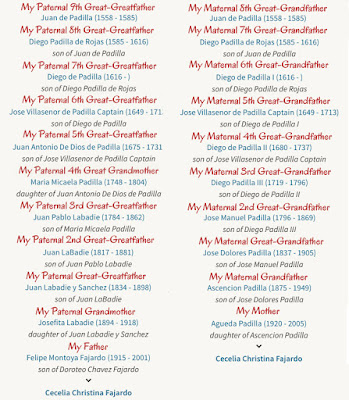 My mother was very proud of her Padilla/Valdez heritage. She often spoke proudly of her great uncles and their importance in shaping the early political climate of New Mexico. The Labadies were as important, if not more so, in shaping the early New Mexican government. More about that later but I do come by my political passion honestly. I only learned about 2 generations of family history and I am guessing it's because that was all my mom knew about. There's no way I would have been able to do all this research without a whole lot of time on my hands, lots of coffee, my trusty little Macintosh laptop with ultra fast internet speed. 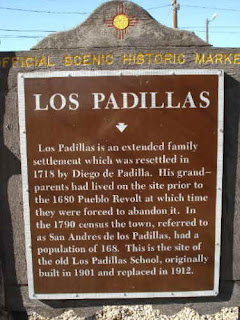 I've always known that "Los Padillas" is a community south west of Albuquerque, New Mexico obviously settled by Padillas but I couldn't connect those Padillas to my family in Puerto de Luna, a few miles to the east. This week I discovered "Los Padillas" was settled by my 4th Great-Grandfather Diego de Padilla. His grandparents had lived there prior to the 1680 Pueblo Revolt when the indigenous Pueblo people fought back against the Spanish colonizers in the province of Santa Fe de Nuevo Mexico, present day New Mexico. 400 Spanish people were killed the remaining 2,000 settlers were temporarily driven out of the province. This is where the reality of the history strikes a chord with me. I now know, from the deepest part of my soul that history does in fact repeat itself and it is our job is to learn from the past and use that knowledge to better our future. Our current political climate and division among us is nothing new but it makes much more sense to me because I have a deeper, personal knowledge of the past.

It is no secret that during the Spanish Inquisition some of my Sephardic Jewish ancestors were literally kicked out of Spain due to their religious beliefs, meanwhile some of my ancestors were responsible for these atrocious actions. As if that weren't enough, my Spanish ancestors were then sent to the Americas to convert everyone to Catholicism by the power hungry Spanish government and it's religious officials. They proclaimed the need for a pure and unified Spanish-Catholic race, forbidding intermarriage between Catholics and anyone else, believing this would destroy their ideal of purity of blood. Well, in my case, it worked fairly well for them for close to 500 years, even after leaving Spain. According to my DNA test, I am 26% Native American, so 74% of my ancestors played along with staying in the herd.


As in every situation, some of the settlers had good intentions, others came to the Americas out of greed and the need for power. In the long run, thousands of Spanish explorers and indigenous Americans died in the name of religion. The division we are seeing in our country today is nothing new. But instead of the King of Spain we have a greedy, power hungry top 1% of the population who are more than happy to elect a leader to lead the blood hungry masses into complete chaos in their attempt to divide and conquer for personal gain while using religion as an excuse to hate people. The reality is that no religion teaches us to hate people due to different beliefs or skin color. There should be no walls to keep people in or out. We are all created equal, yet the the fear of lack and greediness of those who are most often in power overshadows the need love one another. My very insightful son said to me the other day that most often people see those with money as the ones to support and follow, when in fact it is the healers and the mystics that deserve our respect and honor. I think that the Native Americans knew that yet they were often forced to change their beliefs or die. My journey is not to learn about those that divided and conquered in the name of religion. My goal is to learn about those that have been the spiritual leaders, the healers that brought people together. I am happy to say I have found many in my personal history that were just that. I am blessed to have their DNA.

So there is your Padilla history lesson for the day! I have interesting stories about many of these Padillas but the basic run down is that Juan de Padilla was born in Seville, Andalucia, Spain in 1558 and for 4 generations after that, the Padillas were in transit from Spain, through Mexico, into New Mexico. I am sure they endured many hardships on their journeys. Those memories live on in my DNA and I honor their memory. 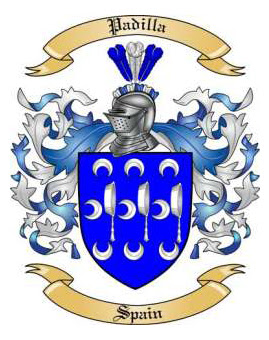