I am hoping that one day my family's story will become a book. It makes it all that more interesting when you have a character like William Bonney woven into every corner of the story in the1880's when Puerto de Luna was a lively community. I only wish my mom and dad were alive so they could see it on paper.

As I mentioned, William Bonney spent a lot of time at the Grzelachowski General Store. When I was 16 years old, living with my Grandma Rosita, there was a small store/gas station next door to what used to be the Grzelachowski General Store. My first cousin Percy Padilla and I worked there on the weekends. It was a light green, 2 roomed adobe building. There was a pool table in one room and in the other room were a cash register, shelves of canned goods and candy, a refrigerator full of generic sodas. We sold gasoline to the locals. There were the regulars who would come by to put their quarter on the table to take their turn at pool and another quarter for a soda. I had not a clue what had taken place in that very location a century before. I would have asked a lot more questions of the old men that came in for cigarettes and gas. Bobby Gerhardt (my second cousin) was one of my favorites. He was a tall, blue eyed rancher with the a golden farmer's tan. He always wore a grin and joked with everyone he met. He spent evenings at my grandma's smoking cigarettes and drinking a cold one with with my uncle Jose Padilla out on the screened in porch.

Bobby Gerhardt's nightly visits meant a little more to me when I realized William Bonney also spent time on a ranch just down the road from Puerto de Luna in Los Ojitos. The ranch was owned by Dr. John Gerhardt, a German immigrant born May 23, 1830. He and two of his brothers were from a family of twenty children. I am guessing they were looking for a better life when they landed in New York before he moved to New Mexico. He lived in Fort Sumner for a year working as baker-pastry maker, the profession for which he had been trained in Germany. He then bought a ranch in Guadalupe County and spent the remainder of his life as a rancher and physician. John was the only practicing doctor in the vicinity. I remembered stories of my Grandma Rosita Valdez Padilla's older brother Hilario being married to Dr. John Gerhardt's daughter Katie, They were married in February 1900. Hilario was the Gerhardt Ranch foreman for many years prior to marrying his daughter. Later Hilario and his wife Katie had a ranch in Los Ojitos and Grandma Rosita Valdez Padilla and my Grandpa Ascencion Padilla had an adjoining ranch. I'd heard the old folks speak of all of these characters my whole life but didn't pay much attention to the Spanglish (half English and half Spanish) conversations and private jokes that they had shared for years. Oddly, when I started doing the research I adopted a cat named Katie and then another named Rosita. It wasn't planned. It felt like it was a little private cosmic joke on me from the Universe that they came with the names of my grandma Rosita and her sister-in-law, Katie. Often, as I drank tea engrossed in my late night research, I imagined the sister-in-laws, Kate and Rosita, cooking posole together as they tended to fire in the wood burning stove and the children playing on the dusty wooden floors of their adobe houses while their husbands, Hilario and Ascencion worked the ranch.

My grandparents later moved to Puerto de Luna because the ranch in Los Ojitos was flooded creating a lake for farmers.

It took me years to piece together immensely important information in a collection of the 1880 census documents and one page of the 1890 census. All of these census documents were filled out by my 3rd great-uncle, Lorenzo Labadie. Fortunately, since he was related to most of the people in the area, all the information was extremely accurate. These documents gave me not only the timeline for the family history but a birds eye view of the the closeness of the small community that my mother and my father's family lived in.

Needless to say, in the wee hours of the night while doing research, I felt like I came to know Lorenzo and grew to love and respect him as a person. He was a key player in helping me piece together my family history. Our family history. Because of Lorenzo's accurate accounts of my family a century ago, I have been driven to do the same for my children, grandchildren and all my other relatives that will live long after I am gone. 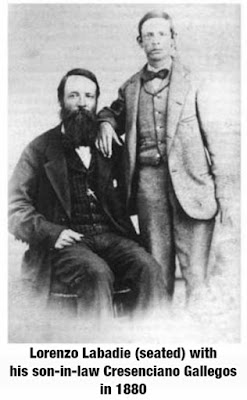 Lorenzo was described as a handsome, honorable man who wore many hats. He was the grandson of my 4th great-grandfather, Dr. Dominique Labadie, an immigrant from Gascony, France. Lorenzo married Rayitos Giddings, a beautiful blue-eyed 14-year-old called "one of the fairest daughters of the territory," in February 1852. Rayitos was just as colorful in her own right. She was raised and educated by her great aunt, Maria Gertrudis Barcelo, AKA Madame La Tules, an intriguing, free-spirited woman who dominated Society in Santa Fe. She was known as one of the best professional gamblers in New Mexico. Rayitos later became a well known doctor. On the day of their wedding, as a wedding gift, Lorenzo received a commission from Governor James S. Calhoun as colonel of the territorial commission. In 1851 he was the Sheriff in Valencia County where he served 3 terms. Like his friend Kit Carson, he was a sympathetic and a loyal friend to many of the Native Americans. In 1855 he was appointed as a U.S. Indian Agent and served for 15 years. He gained respect and confidence seldom obtained by the Native Americans as an Agent. Under his watchful eye, the Native Americans worked side-by-side with soldiers, damming the Pecos River to irrigate crops, planting trees, and building a slaughter house. They had 94 gardens spread over a 100 acre area and grew melons, pumpkins, chile and green beans. He was removed as an agent because he protested against the Native Americans being furnished unwholesome food by the government.

Lorenzo was also the Post Master of Santa Rosa from 1884 until 1898. In 1885 he signed a petition to get Rifles for Puerto De Luna. On February 2, 1893 he won a case against Celso Baca for cheating on the Election for seat on the 30th. Legislation Assembly of New Mexico as representation for Guadalupe County. Lorenzo was elected. On June 29, 1896 he wrote a letter concerning the Agua Negra Land Grant. Juan Patron, his son-in-law who had been killed, owned part of that land grant. 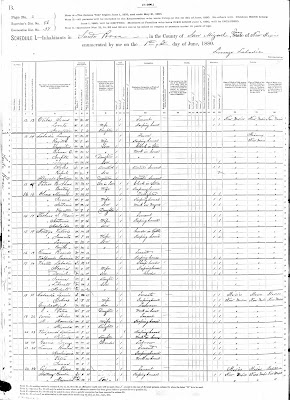 So without the census that was recorded of 1880, in Santa Rosa, Puerto de Luna, Los Ojitos, Cedar Springs and Ft Sumner I would just have some scattered stories. However, on June 1 and 2, 1880, Lorenzo recorded the census of Santa Rosa which included himself, his wife Rayitos and their children including Beatriz and her husband Juan Patron. (There's a book called "Juan Patron: A Fallen Star in the Days of Billy the Kid" Juan was a hero of the the Lincoln County War and was killed at a young age) 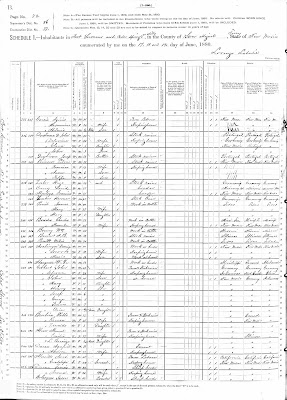 On June 17 and 18, 1880, he recorded Charles Bowdre, Manuela Bowdre and William Bonney with the two men stating that they worked in cattle. On the same page John Gerhardt and his family is listed (my Uncle Hilario's wife not listed because she wasn't born until 1882.) It took me over a year to find the next page of the census showing that on the next day, June 19, 1880 he was in the home of my Great-Grand Grandparents Febronio and Maria Valdez recording the various details of their home and 6 of their children (my grandmother wasn't born until 1884) 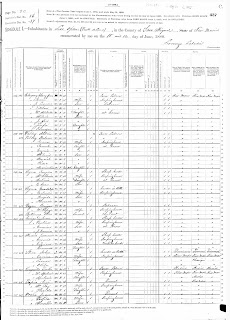 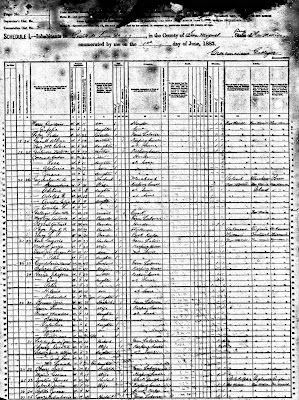 The census for Puerto de Luna 1885 above shows many of the residents of Puerto de Luna. My Great-grandmother Dorotea Chavez is shown to be the wife of Juan Labadie y Sanchez, my great grandfather. My grandmother Josefita Labadie wasn't born until 1894. My Great-grandfather died in 1898, when my grandma was only 4. Interesting because my grandma died when my dad was 4 too. Anyway, on this census there is a boarder at the home of Alexander Grzelachowski named Antonio Montoya. He married my Great-grandmother Dorotea Chavez after Juan Labadie y Sanchez died.

Lorenzo Labadie was also the census taker in 1900 in Puerto de Luna. This was probably the most important discovery of all for me on my journey to discover my father's past. My father's name was Felipe Montoya Fajardo. We were always told that my paternal grandmother's last name was Montoya, I never knew her because she died in Puerto de Luna when my father was 3 of the Spanish Influenza. 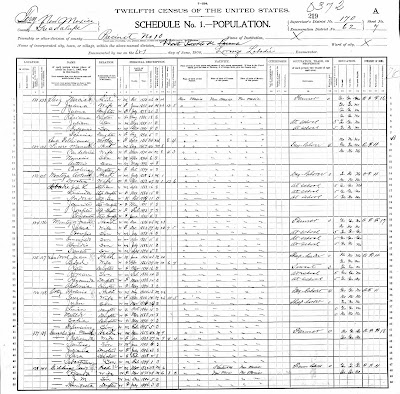 
On the 1900 Puerto de Luna census, Lorenzo recored Antonio Montoya as head of household with wife Dorotea. I thought I had hit the jackpot, finding my great-grandparents but with further examination I saw that the six children were listed as step-children to head of household and their last names were listed as Labadie. That was when I discovered that my grandmother Josefita was in fact a Labadie not a Montoya and this started my long journey down the Labadie branch of my family history. My great-grandfather Juan Labadie y Sanchez died before my grandma was seven and she was adopted by her stepfather Antonio Montoya. I've often wondered what kind of relationship Lorenzo had with Dorotea, his deceased older brother's widow and mother of his nieces and nephews listed as Montoya's stepchildren. On the 1880 census Antonio Montoya was not yet married to Dorotea and and working as a "servant" at the Grzelachowski General Store.