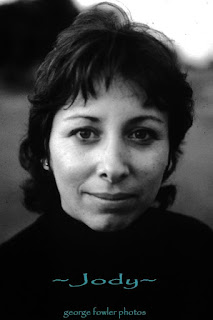 During the early morning hours of December 25, 2003, our beautiful friend, Jody Fischer, began her elaborate journey to join the Great Spirit. As she drew her final breath, one friend held her hand while her other friend, Miles, played Seven Steps to Heaven on a trumpet in a corner of the room. Hoka Hey. This is a great day to die. Debuting on December 21, 1949, in Pittsburgh, PA, Jody was the second daughter born to Lois Danahey. At age six, after the death of her mother, Jody moved to Charlottesville, Virginia, where she stayed until setting her sights on New York City. She was passionate, romantic and delightfully impulsive, and it was these qualities that eventually brought her to Austin, Texas, in the early 1970's. Jody began working with Austin musicians through her job at Moon Hill Management before becoming the secretary at Willie Nelson's Pedernales Recording Studio, where she was employed for several years. She has made numerous long time friends in the entertainment business and was very much a part of the early Austin music scene. You're not from Texas, but Texas loves you anyway. As a Farm Aid volunteer, Jody was a true friend to the American Farmer, spending many loving hours counseling and lending a caring, loving ear when no one else would, and for this alone, she'll never be forgotten. Jody also has loved many Sioux, Navajo and Hopi Native American brothers and sisters, who, not only love her in return, but will always respect and honor her life. Perhaps your child even snuggles up nightly in one of her famous Cowboy Covers she has made through the years, that, as she said, ``are made with prayers and love for the children'. Her unyielding care and support has made an everlasting change in the lives of many, many people and her contributions to this world were gifts that can not be measured, but merely treasured. Jody is survived by her sister, Erla Hagan, two nieces, Mara and Sasha, and a nephew, Adam of Charlottesville, Virginia. She also leaves behind her loyal and trusted companion, Guy of Briarcliff, and a planet of grateful two legged, four legged and winged creatures that she fed and cared for daily. All the close friends who cared for Jody at the end wish to thank her oncologist, Dr. Jack Whitaker, the 7th floor nurses at Seton Hospital, plus a very special thank you to the doctors, staff and a multitude of angels at the wonderful Christopher House. Memorial services will be held in mid-January for friends and family. In lieu of flowers, please make contributions payable to the Christopher House. ``Behold, a sacred voice is calling you; All over the sky a sacred voice is calling.' MITAKUYE OYASIN. We are all related.
Published in Austin American-Statesman on Dec. 28, 2003
Posted by Christina Fajardo at Thursday, December 25, 2003 No comments: