My Valdez Family of New Mexico from Oviedo, Asturias, Spain

Five years ago, in the early days of my ancestry research, I discovered that the Fajardo family originated in Andalucía, Spain. Simultaneously, I saw my favorite chef and world traveler, Anthony Bourdain, on an episode of "Parts Unknown" in Andalucía. I was moved by this episode more than any other. I pondered the word "duende," used by the Spanish Flamenco musicians and dancers. It is said to be the hardest Spanish word to translate to English. It’s meaning is akin to spirit, passion, inspiration – a spontaneous feeling arising in creativity. It's particularly relevant to the arts that are born and die perpetually, like the performance of a dance or song or even cooking.

I was listening to "El Duende Flamenco de Paco de Lucia" to see if I could gain insight into what the word "duende" meant to Paco, the most famous of Flamenco guitarists. It excited me because it was something I had always felt but didn't have a word for. There are many words that don't translate from Spanish to English. I have known from a very young age that words don't translate from Spanish to English, neither do customs and traditions. Most importantly, neither does the passion. There was always a passion that my mother had when she spoke that I didn't see in my friend's parents in Amarillo, when I was growing up. I've been told on more than one occasion by ex-boyfriends that I was too sensitive. They didn't comprehend the fire in my soul and it was scary to them.


Much of the information was in Spanish but I felt like I was being guided by a spirit much larger than myself to dig deeper. I stayed up late and woke up early to read about Andalucia, the Fajardo castle, Paco de Lucia and the word "duende." I took a break to get more coffee and rest my brain. I opened the CNN website to read a little morning news and discovered that Paco de Lucia had died of a heart attack that morning. What are the chances that I would be listening to his music and researching the region of Spain where he was born on the morning of his death? I was really blown away by the synchronicity. As I read on, I realized Flamenco originated in Andalucia, as was bull fighting.

For the past five years I have been overwhelmed and humbled by my family history and the information that seems to just appear out of nowhere. Because of this phenomenon, ancestry research has become somewhat of an obsession. I feel that it's my duty to record my family history. The information seems to fall in my lap from time to time and I don't think it is my chance.

So... fast forward five years... I took a trip to New Mexico this month. The airbnb we stayed in was north of Taos, a couple of miles from Valdez, NM. That was a sign to me that it's time to dig deeper into my Valdez lineage. My maternal grandmother was a Valdez and my mom was extremely proud of her Valdez family heritage. But the stories only went back to the late 1800's when Billy the kid worked on my great-great uncle's ranches on the banks of the Pecos River in Puerto de Luna. My favorite story about Billy the Kid was that after the ranch work was done in the evenings, he taught my 7 year old Great Uncle Hilario Valdez to read and write in English. This tells me that Billy the Kid was not the cold blooded killer that you read about in the western novels, but someone with a kind heart who was a protector of the Hispanic families that had taken him in when he arrived in New Mexico as an orphan. When the cattle rustlers came to steal from his adopted family, he acted as a protector.

My research took me off into a hundred directions and it has taken me almost 5 years piece together the back story on the Valdez family. After my recent trip to New Mexico, took me within a couple of miles from Valdez, New Mexico, I discovered that my 7th great-grandfather, Jose Luis Ruiz de Valdez was the first Valdez to come to New Mexico from Spain. He was born in Oviedo, Asturias, Spain in 1664. I started writing this blog earlier this week and just like clockwork, tonight "Anthony Bourdain: Parts Unknown" 2nd episode of his final season was in Asturias, Spain. I was glued to my TV. His co-host is Chef Jose Andres. As it turns out the people of Asturias are sheep herders and musicians. Go figure.

Anthony mentioned that Chef Jose was sued by Trump in 2015 after he canceled plans for a restaurant in Trump’s hotel in Washington DC after Trump’s disparaging remarks about Mexican immigrants. In this episode, Chef Jose Andres was wearing a T-Shirt that says "We Are All Dreamers."

Thanks Anthony and Jose. ❤️ 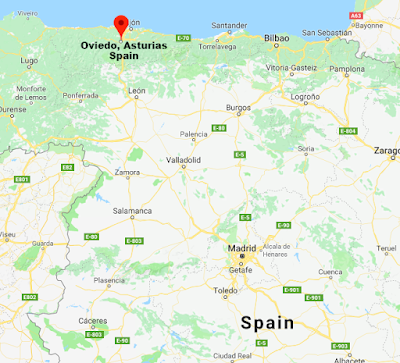 I don't know why it surprises me but it's somewhat overwhelming to think I am a direct descendant of just about every Spanish settler of New Mexico.

I found a "Taos News" newspaper clipping written by Jerry A Padilla about the original Valdez family on Ancestry.com. It was attached to Jose Luis Ruiz de Valdez. I downloaded it, read it and was blown away.

According to the Taos newspaper article, Jose Luis Ruiz de Valdez was the son of Francisco Ruiz de Valdez and Maria de Caso Valdez both born in Asturias, Spain. Jose Luis Ruiz de Valdez was the first Valdez to arrive in New Mexico. He of course had to make the trek across the ocean and through Mexico. He met the woman he would marry in Mexico City, Maria Medina de Cabrera. She was of Spanish decent but had been born in Mexico City. They moved to New Mexico in the colony of 1693, the reconquest after the Pueblo Revolt of 1680 with their two children. Jose was 4 and Ana 1 1/2. After arriving in New Mexico, they had 4 more children, Ignacio Luis, Catalina, Juan Lorenzo and Domingo, my 6th great-grandfather.

Unfortunately, Jose Luis Ruiz de Valdez was killed by the Zuni Indians in the Mission church of Zuni while he and two other Spanish soldiers were singing an alabado after Mass, on Sunday, March 4, 1703. Jose was only 39 and his wife, Maria only 30. A sad end for a promising soldier and family.


Of the Valdez girls, Ana married Lazaro Antonio Cordoba in 1710.
Catalina, nicknamed " La Prieta " was murdered by her husband, Miguel Lujan in 1713. Her mother was still living in this year and gave her age as forty. Maria Hernandez de Medina Cabrerra died in Santa Cruz de la Canada in 1731. 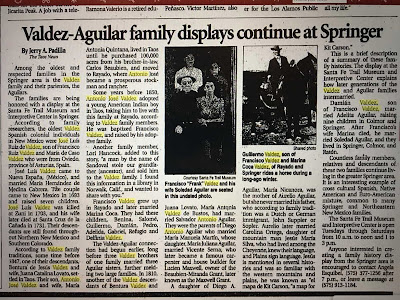 I decided to look up the writer, Jerry Padilla, who I figure is more than likely a distant cousin since I have Padilla's on both sides of my family. What I found, unfortunately was Jerry's obituary from 2012. He was born in 1952 and  a long time resident of Taos. Jerry was an avid historian, and was very involved in preserving and teaching the history and culture of Taos and Northern New Mexico, which earned him recognition from the Taos Country Historical Society. He was an artist who painted in acrylics. Seems like he was a cool guy.

I really appreciate other's research on ancestry because it makes mine easier. I was able to fill in the 7 generations between me and my 7th great-grandfather, Jose Luis Ruiz de Valdez. 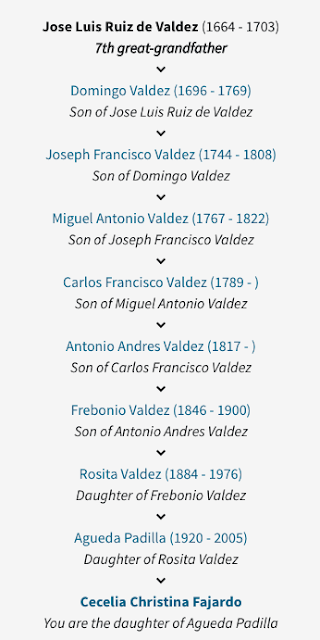 Jose Luis Ruiz de Valdez a native of Oviedo, Spain, was thirty years old in 1694. Two years later he was a sergeant at Santa Cruz. His wife was Maria Medina de Cabrera, a native of Mexico City, who came with him in the colony of 1693 (The Reconquest) with their two children, Jose who was 4 and Ana, who was 1 1/2. After arriving in New Mexico, they had 4 more children, Ignacio Luis, Catalina, Juan Lorenzo and Domingo. Jose Luis Ruiz de Valdez was killed by the Zuni Indians in the Mission church of Zuni while he and two other Spanish soldiers were singing an alabado after Mass, on Sunday, March 4, 1703. Jose was only 39 and his wife, Maria just 30. A sad end for a promising soldier and family.

Of the Valdez girls, Ana married Lazaro Antonio Cordoba in 1710.
Catalina, nicknamed " La Prieta " was murdered by her husband, Miguel Lujan in 1713. Her mother was still living in this year and gave her age as forty. 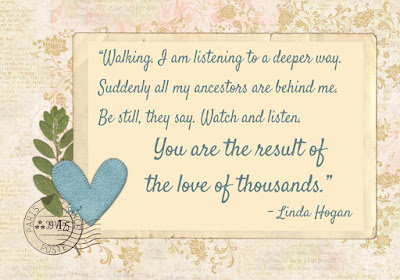