I haven't written in my blog since August, 2019. No reason in particular. Now that I have been sitting in quarantine with my thoughts for 6 weeks, due to the world wide pandemic, COVID-19, I've decided it's time to write about how deeply I feel about our situation.

When the quarantine began, I approached it with fear and grief. Fear because I am over 60 with a heart condition and grief because I couldn't get my grandmother, Josefita Labadie Fajardo off of my mind. She died 102 years ago due to the Spanish Influenza of 1918 when an estimated 1/3 of the world’s population was infected  – resulting in at least 50 million deaths worldwide. I never imagined with the incredible advances we have made in medicine that we would be facing a pandemic in 2020.


My father, Felipe Montoya Fajardo, was only three years old when his mother died. This I know, he spent his whole life with a huge hole in his broken heart, looking for his mother's grave. He never found it. After my dad had passed away, I read  that so many people had died in the winter of 1918 that the victims had to be buried in unmarked group graves. It was too risky to have funerals.

The Spanish Influenza had showed up on the west coast of the United States in the Spring of 1918. Then the curve had flatted, however when WWI ended, on November 11, 1918, people came out of quarantine to celebrate and the second and worst wave of the flu hit in the winter of 1918. That is when my grandmas died. It didn't stop there, it hit again in 1919.

Have you ever wondered why it was called the Spanish Influenza? It was a misnomer. It didn’t start in Spain. During WWI Spain was neutral so censorship wasn't impose the press. France, England and the United States newspapers weren’t allowed to report on anything that could harm the war effort, including news that a crippling virus was sweeping through and killing the troops. Since Spanish journalists were some of the only ones reporting on a widespread flu outbreak in the spring of 1918, the pandemic became known as the “Spanish flu.” 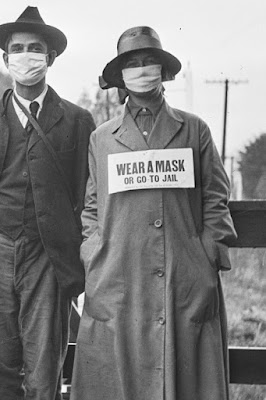 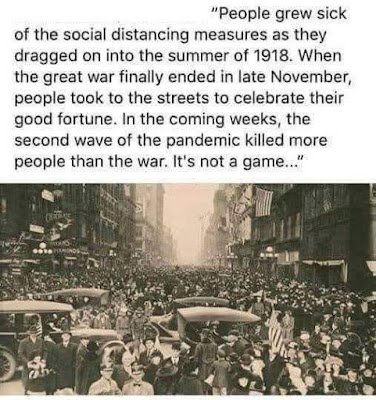 As fate would have it, just a few weeks prior to the COVID-19 quarantine, I was chatting on Facebook with my friend/prima, Jasmine, who lives in Santa Rosa, NM. A friend of hers chimed into the conversation and we ended up chatting for a long time and it felt like another one of those God sends that I happen onto once in a while.

Her name is Kimberly and she said "I think I have read your blog on your ancestry. You are descended from the Labadie family. I am fascinated by that family. I live on a piece of their property, between the hemp farms."
I replied "Oh Wow! Yes, my paternal grandmother was Josefita Labadie. I didn't know there were hemp farms in Puerto de Luna! I am totally fascinated by that lineage of my family as well. I never knew anything about them until I started doing research because my grandmother died of the Spanish Influenza in 1918 when my dad was only 3 yrs old. I discovered so much of my ancestry from the census taken in Puerto de Luna in 1900 by Lorenzo Labadie, but he had such an amazing life before that. He was a Lieutenant Colonel. His daughter, Beatriz was married to Juan Patron, another very interesting person. There is a book written about him called "Juan Patron: A Fallen Star in the Days of Billy the Kid."

Then Kimberly wrote "That was the best book! Sadly the Labadie homestead was bought up. They have built a huge four story CBD processing facility. They have basically destroyed the beauty of the ranch. However, Lorenzo’s original Adobe is still there. Plans to tear it down were abandoned. Now they know they historical significance of it. The people who owned this land and who sub-divided it, were obsessed with Lorenzo Labadie as well. The wife did a ton of research on him and passed it on to me. It is all stuff you have found, Im sure. Richard Delgado said my place is where Juan Patron and Beatrice lived. I found Roman’s grave and Beatrice’s next to him at the cemetery on Reilly Road.


And Lorenzo's grave is in Puerto de Luna. I am trying to find the truth about my house. It was a ruin that someone enlarged in the early 2000’s. It makes sense it was Beatrice and Juan's house. I’ve often wondered where all the Labadies scattered to. Most of the other old families have a presence here. The location of Lorenzo’s Adobe is the second drive way coming from Santa Rosa on the west side of the highway before Blue Jay Rd which is where the Delgado’s live. There are county dumpsters at the gate."
I wrote back "Oh my goodness, this is very touching! I have lived in Texas most of my life so I haven't had the opportunity to do much physical research. It is really very cool that you live there. I would love to see photos!" 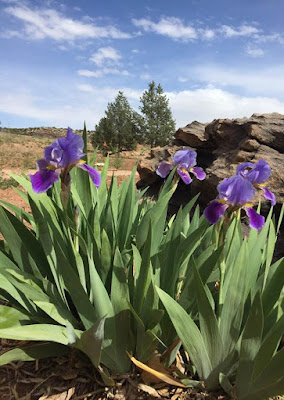 Kimberly posted this iris photo on
Easter Sunday, April 12
Not knowing what it would mean to me.
It was the 15 year anniversary of my mom's passing.
Mom and Dad always had iris plants in their yard.
My mother used to mention the Labadie family on occasion when she talked about her uncles who were politicians in New Mexico. I wish I had paid closer attention to the stories she told. After my grandmother Josefita died, my grandfather, Doroteo remarried and started another family so my grandmother's memory was all but erased, except from the heart of her only son Felipe.

So I started doing my own research about 10 years ago. My Great-Great-Great Uncle, Lorenzo Labadie was the census taker in Puerto de Luna and surrounding areas in the late 1800's to the early 1900's. I discovered some of the most important information from these documents. I always felt like I had hit a jackpot of information if I found a census taken by Lorenzo because all of his census documentation was very accurate and legible. He not only knew everyone in each household, he was related to all of the ones that I was researching. I felt like I grew to know him, late at night as I drank tea and combed through his well recorded documents.


The census in Puerto de Luna in 1900 was a huge find for me. I found that my Grandmother Josefita Labadie and her sisters were living with her mother Dorotea and her stepfather, Antonio Montoya in Puerto de Luna. Up to that time I thought my grandmother was a Montoya but it listed all the children as step-children to the head of the household, Antonio Montoya and they all had the last name Labadie.

Lorenzo Labadie lead a very active life. He was born August 10, 1825 in the Rio Grande Valley, south of Albuquerque. He was a sheriff of Valencia County, then a sheriff of Santa Fe. He then became an Indian agent for several tribes. Then my favorite part of Lorenzo's life, in 1871 He got a merchant's license to open a wine shop in Puerto de Luna. It's not hard for me to imagine the grape vines and orchards along the Pecos in Puerto de Luna. And then at last in 1880 - 1900 he was the census taker. The documents he recorded confirmed the stories I had heard that Billy the Kid had taught my great Uncle Hilario Valdez how to read and write in English, in the evenings after the ranch work was done when Hilario was 7 yrs old. He was also the Post Master of Santa Rosa 1884 - 1898. Lorenzo died on August 10, 1904, in Puerto De Luna, New Mexico and was buried there in the El Calvario Cemetery.

My thoughts now, six weeks into quarantine. I am so grateful to have a safe home and groceries. I thought I loved HEB before but I love them even more now because they have provided curbside pickup for groceries. I have been impressed with most of my family and friends and our effort to flatten the curve by staying home. I think with greater awareness of how viruses and pandemics work, along with better healthcare, we have a better chance than they did in 1918, even if we are working against a president who urges us to not trust the press and has followers who believe the pandemic is a hoax. I feel badly for those areas with dense populations like NYC who rely on public transportation. I am grateful to all my musician friends for the streaming concerts on Facebook and ZOOM conversations with friends. I am grateful for everyone who has checked in on me by phone, text or Facebook. I am grateful for the essential workforce who has continued to work such as healthcare workers and those who work at the grocery stores and pharmacies. I pray that this pandemic takes a downward turn by May 15 so my son can reopen his restaurant. For now I am home, watching lots of movies, eating lots of home cooked meals and feeling grateful that in this moment I feel healthy and I have a cat. And to all that read this please stay safe, stay home as much as possible and be grateful in every moment.
Posted by Christina Fajardo at Monday, April 20, 2020 No comments: