Billy the Kid in Puerto de Luna - Part One

In 2014 my friend, Danny Santos sent this song to me that he had written about Billy the Kid. It prompted me to compile written documentation and photos that surrounded the life and times of Billy the Kid, as it pertains to my family history. Working on my genealogy and learning about these characters has been fascinating. Thanks for sharing your song with me Danny! 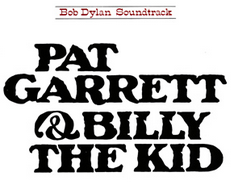 Listen to Bob Dylan - Pat Garret and Billy the Kid


Billy the Kid's legend parallels that of such ancient rogues as Robin Hood. In my personal history books, his actions have been condoned and his loyalty to the Hispanic community of New Mexico is treasured in affectionate memory. My personal favorite story is that of William Bonney teaching my Great-Uncle Hilario Valdez how to speak and read in English. Until recent times, I thought that happened when Hilario was an adult. After a couple of years of research, I realized William Bonney was about 20 and Hilario was about 7 and they lived on neighboring ranches. That makes him an even more endearing character to me. You can always trust the innate instincts of children and dogs to gravitate towards the kind hearted souls to hang out with late in the evening, when the work day is done.

"Pat Garrett and Billy the Kid," the movie, was released in 1973, the year I graduated high school in Amarillo, Texas. The previous year, as a high school junior, I lived with my 90 year old grandmother Rosita Valdez Padilla in Puerto de Luna, New Mexico. PDL, as the locals call it, is on the Pecos River 12 miles southeast of Santa Rosa. It is hard for me to grasp that my grandson Dylan had just finished his junior year in high school in June of 2014, when I started seriously trying to piece together the parallels of "The Kid's" life and that of my ancestors in New Mexico. Yes, my grandson is named after Bob Dylan, partially because "Pat Garrett and Billy the Kid" was one of my favorite movies and albums. I was touched on a level that I couldn't explain. I listened to the album day and night and watched the movie a hundred times. A very young, handsome Kris Kristopherson played Billy the Kid and Rita Coolidge played his girlfriend and they to me, were very cool. The sound track is still hauntingly beautiful to me. I actually fell in love with someone once because he danced with me in his kitchen to the soundtrack on our first date. Now Townes Van Zandt's "Pancho and Lefty" is my grandson Dylan's favorite song and even though the song isn't about Pat Garrett and Billy the Kid, the story is similar. One of my favorite Willie Nelson movies is "The Red Headed Stranger" so I have this deep-seeded belief that the memory of those days in Puerto de Luna is a memory that my grandson and I carry in our DNA. It seems that we live in a parallel Universe and it bleeds over into our reality on occasion.

One evening in 2014, I was looking for a green chile recipes on the internet while my cats Katie and Rosita played on the floor at me feet. I started my search with "Hatch Chile" and the thought what the heck, I should search "Puerto de Luna Chile." It's a pride thing, sort of like having your favorite football team. My family has been growing "Puerto de Luna Chile" for generations. One thing lead to another, finding out that "Hatch Chiles" and "Puerto de Luna Chiles" are basically one in the same -Anaheim Peppers. While wine lovers celebrate wines from different regions, for whatever reason, the hot days and cool nights and red dirt does wonders for the flavor of the chiles in New Mexico and until recent years most grocery stores sold Anaheim peppers from California and Mexico  Now at the end of every growing season, every HEB and Central Market in Texas has a "Hatch Chile Festival." So....an hour or so into the search forgot about the chile recipes when I discovered that an autographed tintype photo of William H. Bonney was being auctioned for millions of dollars. The tintype is believed to have been taken in 1873 in New Mexico when he was 14 years old. The article said that researchers believed Bonney had a crush on a young girl named Dona Valdez, who took food to him when he was in the custody of Sheriff Pat Garrett's jail in San Miguel County, N.M.


This peaked my interest because my Grandma Rosita's maiden name was Valdez and according to my historian cousin, Davy Delgado, Dona Valdez was probably a relative. After much research I realized it couldn't have been my grandmother because she wasn't born until 1884 but I thought there might be a chance that it was her older sister Carmelita.

It's a well known fact that Billy the Kid spent a lot of time in Puerto de Luna, the thriving County Seat of San Miguel County, NM in 1880. There were an abundance of sheep, cattle and horse ranches occupied by my maternal and paternal ancestors. There were gardens, apple orchards and vineyards along the muddy waters of the Pecos River. The gathering place was the Grzelachowski General Store, owned and operated by Alexander Grzelachowski, (Gre-ze-la-hof-ski), also known as Don Alejandro or Padre Polaco. Everyone in New Mexico obtains a nickname, especially if you have a surname like Grzelachowski.


Don Alejandro was a big blue eyed, bearded, hospitable Polish immigrant who had been a Catholic priest before settling in Puerto de Luna in 1872. He married Secundina Cabeza de Baca and they had eight children. Their daughter, Leticia Grzelachowski was married to my Great Uncle Adecasio Juan Padilla, my maternal grandfather Ascencion Padilla's brother. Both Garrett and Bonney frequented the Grzelachowski General Store and Don Alejandro had instructed the store clerks to allow Bonney to take whatever supplies he needed without interference. My father's step-grandfather, Antonio Montoya, worked at the Grzelachowski General Store.


It has always been a dream of mine to invest some time and money in the tiny community to bring it back to the glory days of the 1800's, before the decision was made to build the railroad through Santa Rosa. In 1991 my parents along with several hundred people attended the the unveiling of "The Grzelachowski General Store Historical Marker" in Puerto de Luna. I was hoping a surge of artist would discover PDL at that time and move away from the over priced Santa Fe area, but nothing ever came of it. I was busy raising 2 children in Austin, Texas.... dreaming of someday returning to New Mexico.


Pat Garrett and William Bonney were friends of the Grzelachowski family. Bonney loved visiting Don Alejandro because he spoke at least six languages, including fluent Spanish. He told stories about Europe. Bonney attended the dances at the Grzelachowski General Store and Garrett was known to often stop by the store to talk and eat dinner. Grzelachowski is best remembered by historians as the Puerto de Luna merchant who served Billy the Kid his last Christmas dinner. December of 1880 was a bitterly cold in New Mexico. Bonney was being transported to jail in Las Vegas by Lincoln County Sheriff Pat Garrett, the lean, tough, 6-foot-4-inch sheriff of Lincoln County.  He was nick named “Juan Largo.” He and his posse arrived at Grzelachowski's General Store on Christmas Eve, 1880. They rested their horses in Puerto de Luna that day while defrosting themselves with mesquite fires and whiskey. On Christmas Day Grzelachowski served Christmas dinner. Bonney was sentenced to be hanged on May 13, 1881 but he escaped.

On July 14, 1881, Garrett told his deputies that he had killed the Kid. Some historians have questioned Garrett's account of the shooting, alleging that Billy the Kid was never shot. There has been much dispute over the details of the Kid's death. There were also popular stories that Garrett and Billy had once been friends, and that the shooting was a kind of betrayal. Legends persist that Billy the Kid was not killed that night, and that Garrett staged it all so the Kid could escape the law. Although Garrett was trying to help the community, most people in the area saw him as a villain for killing a favorite son. 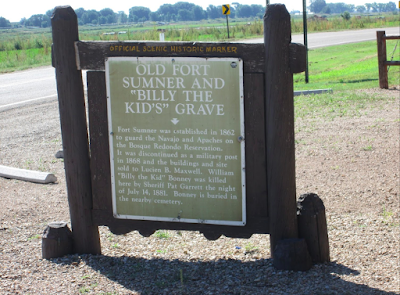