It's been a crazy day... We have had a flood in Central Texas that is worse than the Memorial Day flood of 1981. Worse than any of us have ever seen. Memorial Day, is the holiday honoring American soldiers who made the ultimate sacrifice for their country. So I honor my father today. Tomorrow would have been his 100th birthday if he were still with us. Happy Birthday Daddy. I hope you are having a cold one with all your war buddies in heaven.

I was just told by a facebook friend today:

"Your dad's shoulder patch is the 2nd Infantry Division. This unit fought the entire war from North Africa in Nov. of 1942, to Sicily in July of '43, to Italy in Sept. of '43. They were withdrawn from Italy for the Normandy invasion, did that, and fought all the way to D-Day.

I just remember him talking about being in the 2nd Infantry Division, the Invasion of Normandy, also known as D-Day in 1944. He also spoke about fighting until the end of the war, The Battle of the Bulge in 1945.

My dad Felipe Montoya Fajardo and his first cousin Jose Pilar Fajardo fought in The Battle of the Bulge, WWII, Normandy, France. They had WAY more than that in common. Their mother's were sisters.

My father's mother Josefita, died when he was only 3 years old, due to the 1918 Spanish Influenza so my dad, Felipe and his cousin, Jose grew up sort of as brothers.
They also married sisters.
My dad married my mother Agueda and Jose married her younger sister Carolina.
Complicated I know but I promise, when you sort it all out, there is no incest going on there. 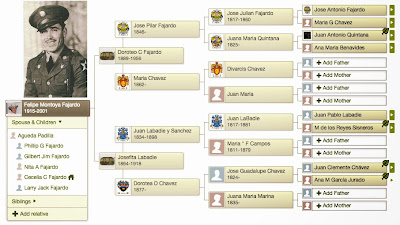 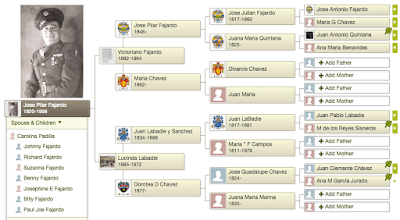 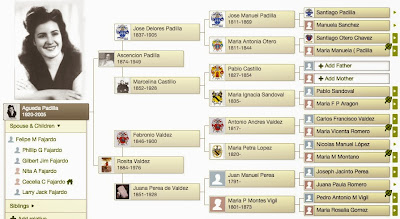 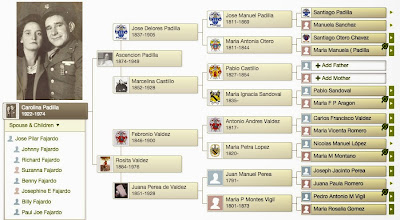 Before they left for the war, my Uncle Jose married my mother's little sister, Carolina. As my mother told the story, when they returned from the war, Connie and Jose had a son, Benny. According to my mother, my dad was a "player." Here story used to change from she didn't like him or trust him to the very romantic story of him having a Model T car that he used to charge the girls a quarter for rides to and from the dances in Puerto de Luna from Santa Rosa. It was a 12 mile drive. My mother finally admitted that she wanted to deter his taxi service to the other young women so she would give him a dollar right up front at the beginning of the evening to "buy" his taxi services for the evening. Smart girl. Very shortly after they had returned from the war, my dad's step-mother became ill. His parents were living in Amarillo where his father worked for the Santa Fe Railroad. He needed to go to Texas to see her, yet he didn't want to leave my mom behind because all the young men who had just returned from the war were looking to get married and settle down. He asked her to go with him to Amarillo and she declined because they weren't married and that wouldn't be proper so he asked her to marry him. They got married in the and he took her to Amarillo with him. The rest is history. I had always wondered why there were no wedding photos and I wondered why they never spoke much of their wedding. She told me this story shortly before she passed away.
Just this past year I discovered that my father's parents, Doroteo Fajardo and Josefita Labadie were married at the Nuestra Senora del Refugo Church, Puerto de Luna, NM on May 12, 1915 and my father was born on May 26, 1915. That was a very well kept secret until after both of my parents passed away.

I can't sing praises enough for ancestry.com. After studying my genealogy for a little while, I have noticed that important dates tend to repeat within the family. My brother and my grandpa Doroteo were born on the same day and my grandparents were married on my birthday. Over and above that, I have either reconnected with long lost cousins or I have meet ones that I never knew I had. It is a wonderful thing to feel so connected.