It has been 5 months since I have been on this intense ancestral journey. Time travel has been amazing. Sometimes I can't help but feel that the souls of my ancestors are here with me on this journey, guiding me from one adventure to the next. Since I am related to many of the conquistadors and families that came with Juan de Oñate from Spain to Mexico, then north on the Camino Real, the Royal Road to Santa Fe, I would have been much more interested in 9th grade New Mexico history than Texas history...but oh well.

Earlier this week I discovered my 12th great uncle, Cristóbal de Oñate, a Basque aristocrat who was born in 1504. He was one of the richest men in the world, a silver baron and then became an explorer, conquistador and colonial official in New Spain. He was the founder of the contemporary city of Guadalajara in 1531. His wife Catalina Salazar y de la Cadena was a descendant of a famous jewish converso family. They had a son, Juan de Oñate. He married Isabel de Tolosa Cortés de Moctezuma, the granddaughter of Hernán Cortés, the Spanish Conquistador who conquered the Aztec Empire. She was also the great-granddaughter of the Aztec Emperor Moctezuma Xocoyotzin. Yes, you read that right. Many of us from New Mexico are related to Cortés and Moctezuma through one woman, Isabel de Tolosa Cortés de Moctezuma. It is sort of mind blowing. She was described as a lady of surpassing beauty, highest virtues. How crazy is it that her bloodlines were royal on both sides, Cortes and Moctezuma?

Then King Philip II of Spain chose Juan de Oñate to lead an expedition to what is now New Mexico. Oñate set out with a group of 600 people early in 1598. Though Oñate's primary mission was to spread Catholicism, the discovery of new sources of silver was also a significant motive for the expedition. Since the Spanish conquistadors were professional warriors, only the ones that were married brought their wives. Oñate of course brought his Aztec Princess Isabel.

The whole reason I went off on the that branch earlier this week was because I am still doing researching on the CCM1 gene mutation that I seem to have that was passed down from my 10th great-grandfather, Gerónimo Zambrano Márquez. He was a Captain in the Oñate expedition. He was married to Ana de Zaldívar y Oñate, the grand-daughter of my 12th great uncle Cristóbal de Oñate. Which would have also made her the niece of Juan Oñate the founder of New Mexico and his wife Isabel, the granddaughter of Cortés and the great-granddaughter of Moctezuma. At least I think I have that right... it is all so confusing...nonetheless, I still haven't received a call back from anyone at the University of New Mexico that I have been told that are experts on the CCM mutation. Very strange.

Last night I read about my maternal 8th great-grandfather, Diego de Vera who was born in La Laguna, Tenerife, Canary Islands, Spain in 1593. He came to Santa Fe and married Maria de Abendano. Three years and two children later, he was tried for bigamy because he had left a wife in the Canary Islands. When I look at photos of the Canary Islands I wonder why anyone would ever want to leave, however, he may have had good reason, his aunt know as "La Perdoma" was tried and and sentenced for practicing witchcraft when she in fact was merely practicing Jewish ceremonies.

This morning I sat down with my first cup of coffee and a gold mine appeared on ancestry.com. Even though I had been able to trace most branches of my family tree at least as far back as the 1500's, my dad's mother's family was still a mystery. She had died when he was three but he had plenty of cousins, aunts and uncles that should have made it easy. The Fajardo and Montoya families had remained close. It should have been easy, right? Wrong.

Today I found a census from Puerto de Luna, New Mexico from the year 1900.
Antonio Montoya was listed as head of household.
His wife was Dorotea Montoya.
There were six children listed.
I looked down to the next to the last name and it was Josefita, my grandma's name... but... the children were all listed as STEP-CHILDREN to the head of the household and had the last name Labadie! My mother told me years ago that there were Labadies on my dad's side but never really explained it and I couldn't put it all together. My great-grandmother had been married to Juan Labadie, they had six children, he died and two years later, at the age of 47 she married Antonio Montoya. I was beyond excited to make this discovery! Then I was sitting here thinking that she was the only grandparent that I didn't have a photo of... then my brother Gilbert called. He said that Stella, the renter in my parent's house in Amarillo had found an old photo in the house. It was my grandparents, Josefita and Doroteo. How cool is that? Her real last name and a photo of her magically showed up on the same day! 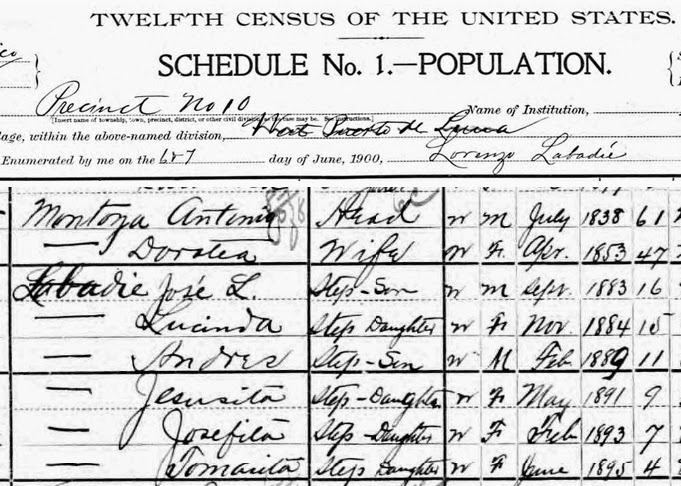 So there is a week's worth of research. I hope to one day put all of this information together and be able to give it to my children and other relatives.... who knows... I may write a book.

It sounds like it could be the screenplay for the next Hollywood blockbuster. I can see the headline in the entertainment section:


“Two Deadly Diseases, Without a Cures,

I am telling you, truth is stranger than fiction. Until 2 weeks ago I had no idea what could possibly be causing my life long ailments, now I think I may be getting closer to the answers to not 1, but 2 diseases that target native New Mexicans.

Here the news cast about on of the diseases today in Albuquerque:

Thousands of people in
New Mexico affected by OPMD

OPMD stands for Oculopharyngeal Muscular Dystrophy. What’s even scarier than the name are the facts behind it. It's a rare muscular dystrophy, but it is common in Hispanics from New Mexico. Researchers believe 6 in every 100,000 New Mexicans have OPMD. That’s compared to 5 out of 100,000 Americans who have the most popular form of a muscular dystrophy disease.
Posted by Christina Fajardo at Wednesday, July 02, 2014 No comments: