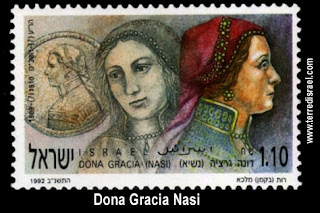 This is a story of an amazing woman, Doña Gracia Nasi (her Christian name was Beatrice de Luna Micas) Her family was from Aragon, Spain. I have been able to trace my mother's side of the family back to the key players to this time and place in history. This would have been 14 generations or 400 years before my time. Gracia Mendes Nasi's family fled Spain to Portugal when the Catholic Monarchs, Queen Isabella I of Castile and King Ferdinand II of Aragon, expelled the Jews from Spain.

Doña Gracia Nasi was born in Portugal in 1510. Even though her aristocratic Jewish family had fled Spain they had recently been forcibly baptized Catholic. In her dramatic life, she became one of the most respected figures of the Sephardi world in the sixteenth century. She was renowned as a resourceful businesswoman and a leader of the Sephardi. She became known among her contemporaries simply as “La Señora.”

On this date in history, April 14, 1556, twenty-five crypto-Jews were burned at the stake in Italy. In response, Doña Gracia bribed the Pope to delay the establishment of the Inquisition in Portugal and organized a merchant boycott of the Port of Ancona, Italy which brought ruin to the town.

Little is known of her early life. She was descended from the distinguished Spanish Jewish family bearing the name Nasi. Her parents may well have been among the Spanish-Jewish exiles who left Spain for Portugal in 1492, only to be forcibly baptized in Portugal in 1497. Her family assumed “de Luna” as its Christian name.

Doña Gracia realized the power of wealth and spent her money wisely by helping people. She established centers for Jewish study, and synagogues and spent a great deal of resources trying to take care of the poor. She helped Marranos escape persecution and relocate to Turkey, and organized a trade embargo on the Pope’s lands. She was arrested several times for helping evicted families. Although she was denounced by her sister, nothing stopped her from helping Jewish people. Doña Gracia settled in Ferrara of Italy, where she openly declared herself a Jew. She continued to help a large number of Jews hiding their identity. She became the patroness of scholars.

Little is known of Gracia Nasi’s last years as well. When she died in 1569, the loss was deeply and widely felt. Her death spelled the loss of a legendary personality— along with her sense of privilege and imperious behavior, symbolized triumph over great adversity, and intense devotion to Jewish life.

Doña Gracia Mendes Nasi was one of the wealthiest women of Renaissance Europe,” but there was so much more to her than her wealth! Widowed in her twenties, she was left with an infant daughter and a partnership in the House of Mendes, one of the great banking houses of the time. She and her husband were Conversos or secret Jews, whose families had been forcibly converted to Christianity but who secretly maintained their commitment to Jewish life and tradition. Besides being a businesswoman, Doña Gracia also managed one of the largest refugee operations in European history, moving converso families out of Spain and Portugal into the Ottoman Empire, where they could openly practice their Judaism and where they were no longer under the threat posed by the Inquisition. At the same time, she was a high-profile refugee herself, moving from city to city as politics shifted. She eventually moved to Istanbul where she died in 1569.

Read about Gracia Mendes Nasi in the Jewish Currents

Posted by Christina Fajardo at Wednesday, April 13, 2016 No comments: