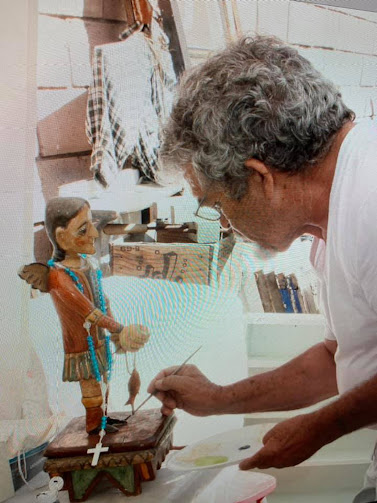 This is Maximilliano Mike "Max” Henderson. He was my first cousin, the son of my mother's older sister, Maria Padilla Henderson and my Uncle Sam Henderson.
I love this photo of Mike because he reminds me of my brother, Phillip.

Mike was born in Puerto de Luna, June 10, 1937. Ten years later, his family moved to Tucumcari. The move was a traumatic one for Mike because he had gone to school in a one-room schoolhouse, surrounded by his family's Spanish language. This was the complete opposite experience I had of growing up in Amarillo, Texas and then going to live in Puerto de Luna with my Spanish speaking grandma in the eleventh grade. It was one of the best experiences of my life.
April 19, 1954, the year before I was born, Mike married, Mary Esther Moya  in Amarillo, TX. He was 17. The couple moved to Los Angeles where they stayed for 10 years. They then moved to Albuquerque and eventually back to Tucumcari, where Mike did car paint and body work. By this time, the couple had eight children. Mike had began to create furniture and art for their house.
Later Mike started selling some of art in Santa Fe. Then when an elderly man showed him a wooden figure of Christ that was broken and held together with duct tape, Mike volunteered to repair it, taking the opportunity to examine the design. He began studying the work of famous artists and books of saints and found encouragement from several famous santeros in northern New Mexico.
Santeros are artists who carve and paint santos, images of saints.
Mike was an International Artist with artwork in Wood Carving and Religious Statues. He was a member the New Mexico Spanish Colonial Art Society.
Mike was closer to my mother's age than he was to my age so I didn't know him very well. We would often stop at my Aunt Mary and Uncle Sam's house when we drove from Amarillo to Puerto de Luna to visit my grandma but Mike was rarely around so we usually only saw each other at weddings and funerals.
When he passed away he was survived by his wife Mary Esther Henderson; two daughters, Cynthia (Larry) Winn of Gallup, NM, and Judith (Phillip) Guttman of Rio Rancho, NM; six sons, Michael (Cris) Henderson of Pojoaque, NM, David Henderson Clovis, NM, Ronnie (Dawn) Henderson of Rio Rancho, NM, Ray Henderson of Tucumcari, NM, Jay (Louella) Henderson of Pecos, NM, and Tom Henderson of Altus, OK; two brothers, Gracien Henderson of Los Angeles, CA, and Walter (Bertha) Henderson Tucumcari, NM; and numerous granchildren and great-grandchildren. He was preceded in death by his parents, one son, three brothers, and three sisters. 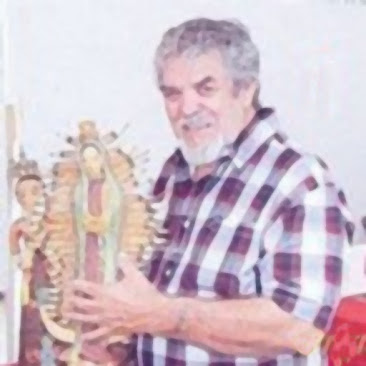