A couple of  days ago I was scrolling through Facebook while drinking my morning coffee and came across an interesting post on:

The video was of a band from New Mexico called  'Lone Piñon' performing a song called "La Julia."

If you know this song, you are probably related to me. HaHaHa.... I'm only half joking. The song is from a collection called “New Mexican Folk Music: El Tesoro del Pueblo,” available from the University of New Mexico Press.

So when I clicked on the video I was transported back to my childhood. It's crazy how this polka could stir such powerful subconscious childhood memories and emotion. 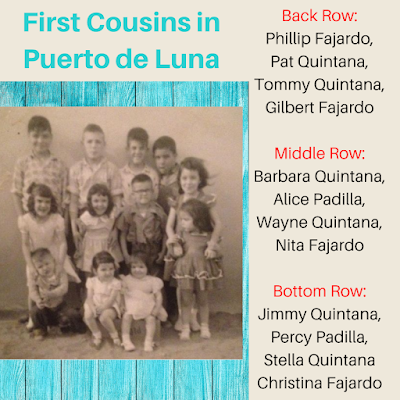 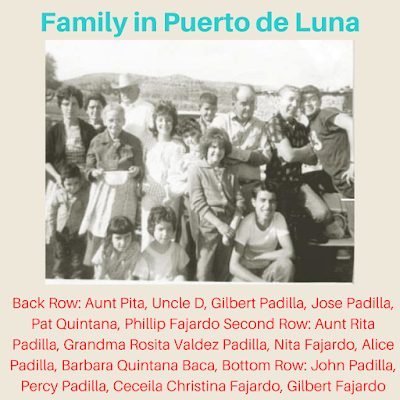 The song "La Julia"  brought back vivid memories of significant occasions, like family funerals and weddings. As a child, these events were one and the same. It merely meant the gathering of my siblings and first cousins at my grandma's adobe farm house in Puerto de Luna, New Mexico, staying up late and feeling totally connected. Meanwhile, my mom and my aunts cooked fresh green chile and squash, beans, rice and tortillas on a wood burning stove at my Aunt Rita and Uncle Gilbert's house. Next door at my grandma's house my dad and uncles would play music, drink beer and smoke cigarettes. Fun was had by all.

My dad and Uncle Joe played guitar, Uncle Guillermo played the accordion and they all sang traditional New Mexican music while dusty children ran in and out of the houses, down to the mora tree by the acequia. From sun up til sun down we played tag and chased pigs and chickens while eating fresh tortillas with butter dripping on the ground.

Some of you won't relate to this song on the level that I do because it's not a mainstream song but for me it's a little like hearing those old Beatle songs, James Taylor, Jackson Browne or early Willie Nelson. Hearing "La Julia"  was even more profound than that. It caught me off guard because I didn't even know the name of the song and until a couple of days ago and I only knew a few of the lyrics because I understand Spanish but I don't speak it fluently. So hearing the song for the first time since my dad died in 2001 was like stepping into a time machine that I wasn't prepared for.

As we all know, the relationship between music and memory is powerful. I saw the healing effects of music  first hand years ago when my friend, Billy Doss took me to see his aging father who was suffering from dementia. He couldn't remember what he had for breakfast that day but when Billy picked up his guitar and started singing his father's songs, he sang along and didn't miss a word. I realized then that music is an important mnemonic device.

So let me back up and tell you how all of this connects for me and why it's of interest. I love music. Fortunately, I am from a musical and artistic family. I realized sort of late in life that my family is somewhat unusual to have so many artists, musicians and generally a close knit family heavily influenced by our Hispanic family traditions. When I realized my family wasn't typical to those I knew in Texas, I dove head first into genealogical research as a hobby to learn more about my Spanish ancestors who settled in New Mexico in the late 1500s. I discovered that I'm related to half the population of New Mexico and now I've discovered there been some really cool songs passed down through the generations along with some great recipes that my son now serves at Taco Circus, his restaurant in St Louis. That's the good news. The bad news is that there's a rare disease that runs rampant in my family called Cerebral Cavernous Malformation or CCM1 also known as the Common Hispanic Mutation. It's been given that name because it is particularly prevalent among the Hispanic population of New Mexico. The defective gene has been passed down through at least 14 generations and the origin can be traced back to the earliest Spanish settlers, my ancestors on both my mother and my father's side of the family. Neurological issues are way too common in my family so I am constantly on a quest to learn how the brain works and how to improve brain function due to my own neurological issues. This new discovery is so cool because I have found that music is particularly healing on many levels.

So without getting too technical, the hippocampus and the frontal cortex are two areas in the brain associated with memory. They take in a lot of information, however, as I've gotten older, I've found that retrieving information isn't as easy as it used to be. Science has proven that listening to and performing music reactivates areas of the brain associated with memory, reasoning, speech, emotion and reward. Music doesn't just help us retrieve stored memories, it also helps us lay down new ones. A perfect example was when my granddaughter Jackie was a couple of years old, my son, Christian was trying to teach her how to say "Taco Circus" she was getting confused so he sang it to her slowly and she learned how to sing it immediately. Music provides rhythm and rhyme which helps to unlock and store information. It's the structure of the song that helps us to remember, as well as the melody and the images the words provoke.

Music can also make us feel strong emotions so rather than just being able to recite the lyrics when we hear songs from our past, we feel the lyrics. For instance, when I hear old Bob Dylan songs, I remember sitting in my bedroom as a teenager, teaching myself how to play my dad's Silvertone guitar and talking to Jay Spann on the phone. That's a memory that I cherish.

So here are the lyrics in Spanish and then below in English to the song "La Julia"  I hope you enjoy listening to it even half as much as I have. I can still hear my dad singing this song with a huge smile on his face.

"La Julia"
Julia’s mom asks her, What was that gentlemen saying to you?
Nothing, Mom, he was just hitting on me.

The neighbor-lady across from here was named Maria Clara,
If she hadn’t have died she would still be named that.

The neighbor-lady across from here killed my white rooster
‘Cause it was digging up her cilantro seeds.

The neighbor-lady across from here had a really cheap cat,
And she says to her husband, Look, old man, it’s like looking at a portrait of you.
I looked up 'Lone Piñon' on Spotify to see if I recognized any of their other songs. "El Valse de la Grama" is my second favorite. Especially since it sounds like it was recorded at my grandma's house with the sound of an acequia flowing in the background with her rooster crowing in perfect timing.
Gracias 'Lone Piñon' for keeping the traditional music of New Mexico alive. I hope to see you perform live some day. You have no idea what fond memories I have of my dad singing these satirical lyrics of old-fashioned New Mexican songs. I am deeply grateful.