That prompted me to see how Thomas Nelson is related to my children on their dad's side of the family and here's what I found. 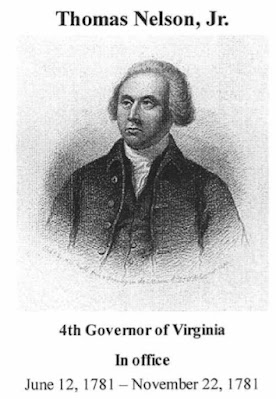 Thomas Nelson Jr. was born in Yorktown, Virginia in 1738 to a very wealthy family who owned a large plantation. He was sent to England for his education, as many members of wealthy Virginia families were. He graduated from Cambridge and returned to Virginia soon after. He married Lucy Grymes in 1762, a member of Virginia’s Randolph family. They had 13 children. Here is where the overlapping of our family tree begins. Lucy was my ex-husband's 2nd cousin 7x time removed. (2nd cousin 7 generations ago) which makes her my children's 2nd cousin 8x time removed. Lucy Grymes' back story is that her great-grandparents were William Randolph I and Mary Isham. Their famous descendants include many prominent individuals including Thomas Jefferson, Robert E Lee, John Marshall, Paschal Beverly Randolph, Peyton Randolph and many others. Due to William and Mary Randoph's many progeny and marital alliances, they have been referred to as "the Adam and Eve of Virginia."
This is an Ancestry chart of how my children are related to Thomas Nelson Jr.

Here are some more photos of Photo of the Thomas Nelson Grave. 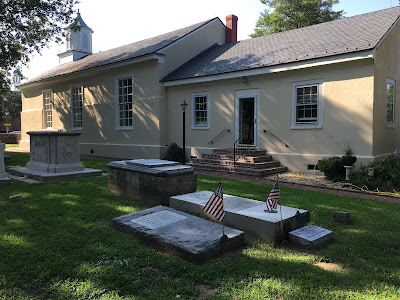 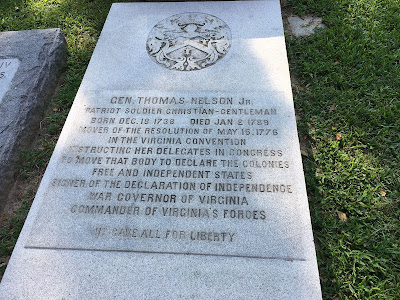 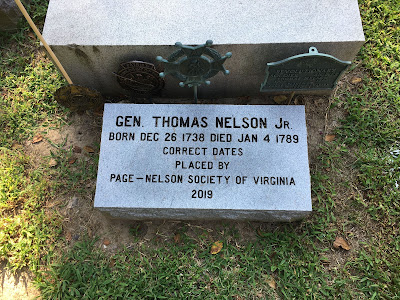 Nelson became a planter and an estate manager. When he and his fellow signers pledged “our lives, our fortunes and our sacred honor,” the men of the Second Continental Congress took that risk seriously. He gave his fortune and his health to further the cause of American Independence.

Thomas Nelson Jr. wasn't a healthy man and the mission of independence took a lot out of him resulting in an early death at the age of 50. He also donate all of his money it to help win the War of Independence.

He was elected to Virginia’s House of Burgesses and was a very outspoken opponent of Britain and their policies toward the colonies and was one of the first leaders in the colonies to entertain the idea of an independency for the colonies. He believed that it was absurd to have the colonists hold an “affection for a people who are carrying on the most savage war against us.” On November 7, 1774, Nelson was a member of the Yorktown Tea Party. Citizens of York County, Virginia had passed a non-importation boycott in response to the Tea Act of 1773. When the British ship Virginia docked at Yorktown, enraged citizens marched onto the ship and dumped two imported half-chests of tea into the water. The boycott was an effort to pressure the British Parliament to repeal tax laws and regulations.

Nelson was appointed as a member of the Second Continental Congress in mid-1775, replacing George Washington when Washington left the Congress to go to Boston to take command of the Continental Army. He had returned to Virginia and was in Williamsburg on May 15, 1776 when the Fifth Virginia Convention passed a series of resolutions declaring Virginia was no longer a part of the British Empire. Nelson immediately carried the news from Virginia to Philadelphia where Richard Henry Lee on June 6, 1776 made the official resolution for independence within the Second Continental Congress, that would lead to the Declaration of Independence. He eventually had to resign from the Congress due to poor health.

Nelson was later appointed a brigadier general in the Continental Army and commanded the Virginia militia during the battle of Yorktown in 1781 during the American Revolutionary War. It was here that one of the most selfless acts of his life took place as he ordered the artillery of the Continental Army to fire on his home, where several British officers were headquartered. The home was heavily damaged. The surrender of the British troops at Yorktown occurred soon after.

In June of 1781, Nelson became the second governor of Virginia, succeeding Thomas Jefferson. He had to resign in November of 1781 due to poor health. By this point in his life, he had lost almost everything. His businesses were destroyed. He was owed over two million dollars by the United States government for his loans to help finance the French fleet and their aid to the war effort. He was never repaid and his financial well-being was destroyed.

Nelson passed away at his home at the age of 50 in 1789 due to severe asthma. His body was originally buried in an unmarked grave in Yorktown because of a fear that creditors may hold his body for collateral until his debts were paid. He now rests under a beautiful stone that pays tribute to him and his service to the United States, including honoring his service as a signer of the Declaration of Independence.