It was 1987, I was 32 and a single mother of two children. My life as I knew it had just crumbled and as we all know that leads to serious soul searching. I had always wanted to go to college but life had gotten in the way. Now my determination wasn't just about me, it was about my children. I had no husband and I was a terrible waitress. It seemed that a higher education was the only choice I had. I knew I wanted to be a graphic designer (at the time the title was commercial artist) I looked into going to UT and Austin Community College. Then someone told me there was a really good Commercial Art Department at Texas State Technical Institute in Amarillo. They had a computer lab with Macintosh computers unlike any other. I was sold. But wait, that meant that I had to move back to a Amarillo and not just Amarillo, extreme north Amarillo. By the nuclear plant, Pantex. Well as Steve Jobs said "It is all about connecting the dots." I was going to have to go way off of my beaten path to get to where I wanted to go. Not only was I going to have to move to Amarillo, I was going to have to leave my 8 year old son with his father in Austin. 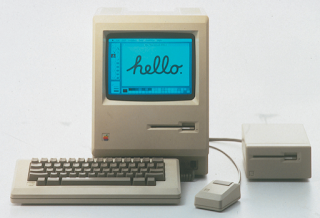 So there I was a 32 year old student, living in family housing with my 9 year old daughter. The campus was on an old army base so family housing was a duplex where the officers lived. It was a block away from the computer lab so I spent every waking hour at the computer lab.  I laugh when I think about what I was able to do on that computer now. I was determined to make use of all the fonts and colors available. Little did I know that a man my age had invented this work of artful magic in his garage just 3 years before. At that time (1984) I had a Calico computer that I had bought at Target, it was basically a word processor that the kids played games on.

So yesterday was a sad day. Oddly enough as I was multi-tasking on my Mac, working in Photoshop, sending emails, reading Twitter and chatting on Facebook I learned that Steve Jobs has gone to the big computer lab in the sky. One by one all my applications on my computer stopped working except the internet and none of them are working even now so as soon as I finish this post my computer is going to my own personal computer genius, Sammy so he can fix it for me. What would I do without my Mac all day every day?

Sometimes it seems that bright stars burn fast and bright for a shorter time than most and then move on. I am hoping that Steve will be sending us ideas from the beyond. Thank you Steve for sharing your genius with us and I would also like to thank my computer lab professor Steve Cost for sharing his genius as well.

Don’t let the noise of others’ opinions drown out your own inner voice. And most important, have the courage to follow your heart and intuition. They somehow already know what you truly want to become. Everything else is secondary.” 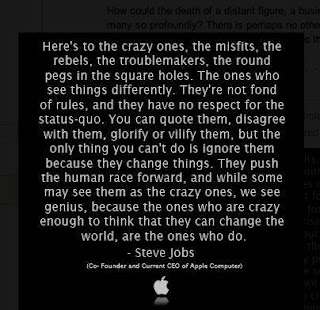