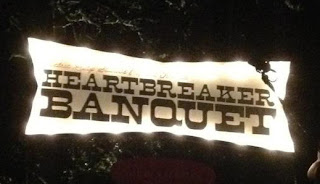 Well I survived yet another SXSW.  This year started out with a bang but I am sorry to say that the BIG act that I missed this year was Bruce Springstein. He just happened to be playing Thursday, the same night that I went with Martha and Nita to an invitation only "Heartbreaker Banquet" at Willie Nelson's western town, Luck Texas, 28 miles west of town in Spicewood. Okay... I am gonna rub it in just a little more... you can read about it in the Rolling Stone.

James McMurtry was the first act to play early in the afternoon but we didn't arrive until 7 pm, just in time to see Matthew Houck of Phosphorescent perform. I discovered Phosphorescent back in the days of MySpace. There was an ad for their new CD "To Willie" that looked just like one of my favorite old Willie albums "To Lefty From Willie." I was so excited that someone had finally done a "To Willie" CD. But wait, it was a young band from North Carolina? What? Really? I messaged Matthew, introduced myself as a friend of the Nelson family and told him I was sooooooooo excited that they had done a CD entirely of Willie songs and called it "To Willie!"  I immediately got a reply. I was then was fortunate enough to meet the band the next time they came through Austin and we have been friends ever since. All of them are just sweet and talented young men and the CD "To Willie" is one of my all time favorites and he sang two of the songs that I love off of their "To Willie" album.

So let's back up a bit, Luck, Texas was the set for The Red Headed Stranger in the 80s and is now a Habitat for Horses foster home for I believe around 80 horses. We mingled around the familiar western town for a while, making our way down to the other end where the chapel is. We were in amazement of all the strangers and food trailers. This little western town has meant the world to us over the years. We raised our kids here. We went to church here, my nephew got married here and we had my mother's funeral here.

In the mid 80s our little group of girlfriends called "The Hormones" started having "church service" here. For the past few years, the Easter service has become a crowded event, so to see it turned into concert location wasn't all that surprising. I am guessing that the strangers in Luck were even more amazed that they were at Willie Nelson's ranch.

The chapel performances weren't much different than the Easter Sunday performances but Billy Joe Shaver's set was so very heartwarming, dedicating  "I'm Gonna Live Forever"  to his son Eddy, who overdosed on heroin.

Then Joe Pug nervously took the stage, stating that he couldn't believe he was booked between two legends Billy Joe and Ray Wylie, but his act was at least as good. 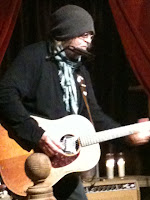 
The big stage performances ended with Gary Clark Jr., who just returned from performing at the White House for Obama.

Can't wait to see what next SXSW holds for Luck Texas!