Dreams and the Power of Healing

There is no question in my mind that we are all connected. I believe it even more so now that I have become aligned with all the ladies world wide through my "Soul Sessions" class. I woke up at 6 am day before yesterday because I had a bad dream. It seems that I do a lot of work in the wee hours of the morning. I went to the kitchen and turned on the coffee and came back to bed to write in my journal. I then looked at facebook to see what was going on with my "Soul Sessions" group. One of the ladies posted that she was blown away by the audio lesson for the day. Melody Ross told of a dream that she had that had changed her life. I went to the class website and listened, I was blown away as well. In her dream there was a tree and all the leaves were falling off and she was crying and trying to glue them all back on. She was not ready for changes in her life but came to the realize that there are seasons of change and eventually the leaves would grow back.

In my dream I was taken on a tour down a dark gray corridor through my relationship with Tony. A very kind, gentle man, who felt like my knight in shining armor (who I now see as my own male energy) was taking me on the tour. As we walked through dark corridors, it was as if we were walking on a time line. I could feel the presence of dark entities as we walked through cold, dark cloudy mist. My male friend kept pointing out signs of our very different paths that have run parallel for a time. He told me met much earlier but it wasn't time for us to be together. I guess he was talking about the 70s when my sister's boyfriend paid for his band to record an album. He showed me how in the beginning I was full of joy and love, totally blind to the reality of who he was even when I got signs. Then we arrived to the place in the time line when my brother was in a coma with a brain tumor and Tony's mother died. Tony reacted to the chaos by turning to his sex and alcohol addictions and we broke up for a time. He pointed to a time I had just moved into my new house and bought a new couch, bed, bed linens. I was so excited to share them all with Tony. He never really acted like any of it mattered however, he went out and bought a new bed, a red couch like my black one and red bed linens like mine. I was hurt that he didn't want to enjoy mine but wanted his own. Then we broke up again when I was nursing my son back to health after a drug addiction. Instead of being there to support me, he walked out only to come back for the good times, to go see Willie at ACL. My friend sat down and said "Sit with me. Do you remember when Tony started calling his band "The Charming Devils?" Up to this point, there were glimmers of light and Tony saw how it could be. He saw it in all your friends, but he really didn't know how to get from point A to point B. You were no longer constantly pouring your positive energy into the relationship but would offer only when asked, realizing he pushed you away when you got too close. Because he operates from a place of fear, when he felt you pull back, he went back to what is familiar, aligning with a much darker force. When he started calling his band the charming devils, don't you remember that he didn't look the same? You started to say no to things you knew where not in your best interest. You woke up because he had finally verbally spoken the truth of who he is.  Remember how the energy changed?   The truth was being revealed and you no longer heard what he said and he no longer heard anything you said. The spell was broken. That is when many of his band members fell away too.  There were some that tried to stay and like you could not live in the darkness, then there are those who already knew the darkness like William."

There was so much information I would have to write a book to share it all. There were cubbyholes along the way, he explained the contents of the cubbyholes to me. He showed me the exact places where he aligned with other women and the darkness that lived there. The game is always to keep as many women living in the untruth as possible. I said "But he he hurts so many people and he  knows it will all come crashing down." He said "He doesn't have the willpower to stop the train." I was shaking. He held me as we sat so I could take it all in and reaffirmed that I already had all this information. 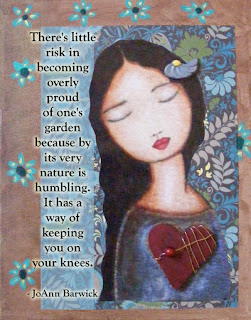 We then walked just outside the dark corridor and sat in a beautiful garden. There was a bridge to an even more beautiful place. He said "You belong here. I am sorry that you suffer. It is your job to show as many people as possible to this garden. Don't be hurt when they don't understand your passion. You must learn when it is time to let go." I sat there crying looking at the trees I had planted in the garden for Tony and me remembering that he never took notice of the beauty of the trees. They were now dying and the leaves were falling. My friend said "There will be other seasons of growth, there are deep roots and those trees are still alive. Others will understand. Now I must go. You can go back down the dark corridor or you can stay in the garden. It is your choice."

Yesterday I spent the afternoon cutting back all the dead plants in my yard, gathering seeds to plant in the spring.