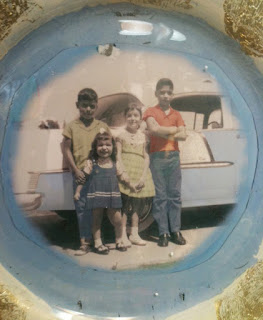 Oprah always says that everyone just wants to be heard or validated. True, very true. Being the youngest of 4 children most of my life (I had a younger brother for 4 years in elementary school who passed away) I never felt like I was heard unless I was upset and crying. Since that was my childhood experience, as I saw it, regardless of the fact that my older sister thought I was spoiled rotten, it seems that I have found myself in situations where I didn't feel validated. I just realized this morning, while working on my "Soul Sessions" class that it is a deep rooted thought. It is sort of an all or nothing thing for me. You are either with me or against me and there is no sitting on the fence, however I seem to have that repeat pattern of attracting the least emotional available men on the planet.

So when someone comes to my house and stands in awe of my art that covers every inch of my house, including my mosaic floors, I realize that is WHY I create. I became creative to get attention. Always thinking outside the box to stand out from the crowd and be noticed.

My family was always wrapped up in my brother's activities like football when I was growing up. Later he became a Grammy Award winning musician and still my parents followed him around the country going to his concerts. These day he is in awe of how far I have come as a designer and a fine artist, but I still seem to attract those that can still ignore my talent. Why? Exactly!  Why? That is the question.

Sometimes I forget who I am.  I have been running with a group of musicians most of my adult life so I normally fall into the background of the their musician talk. Since October I have spent much more time alone reflecting on who I am, what I want and how to get there. This week at Evangeline, I noticed a difference in the way it felt to sit quietly and listen to Danny and Tony talk about $45 guitar picks. Not as willing to just sit quietly and listen. Now that I am no longer the band girlfriend, sitting around and being supportive isn't very appealing. I have art to create! 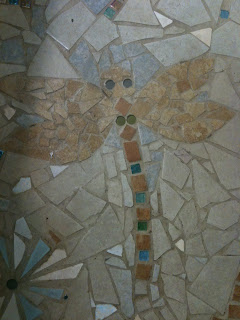 So this weekend Kathy, John and Tammy were here from Dallas. Kathy had been to my house a million times so she was giddy at the thought of having her brother John and his girlfriend hang out with us at Donn's Depot on Saturday and come to my studio on Sunday. Donn's was fun. I introduced them to all my marvelous musician friends and they totally get music because their dad was a bass player in Dallas when they were growing up. But even more importantly, John is a creative soul, an artist. He gets who I am and what I do. He walked in my front door and his jaw dropped. He stood for 15 minutes looking at my mosaic tile bathroom floor with a dragonfly on it. He stood in my studio and examined every inch of crowded studio space. Kathy emailed me later and said that Tammy was so inspired that she is going to start doing mosaic again. Now that is what I am talking about! Someone gets my creative process! 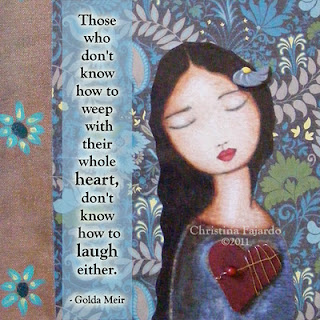 I spend all day every day alone in my thoughts in my studio. It warms my heart to know that I feed the souls of others with my art. Friday night I was at Antone's, my niece, Cayce' band was playing. Her older brother, Derek, told me that he had a very cool experience this week. He was sitting in the Thundercloud on South Lamar at Manchaca, looked up and noticed my art surrounding him on every wall. He said he sat for a while and just listened to customers comment and said at one time he felt the urge to stand up and say "My aunt is the artist!"  How cool is that?  I have often heard it said by musicians that it is hardest to play for family and friends. Being an artist is the same. The people closest to you seem to have a notion of who you are that doesn't vary much. Being able to paint it on a canvas shines a whole new light on one's soul. Derek said to me "Those painting really come from a really emotional place don't they?" My answer to that is "Yes they do. I have paid my dues to get those images onto canvas. There is a story behind each of my "Luna Chicks" a broken heart, many tears and lots of dreams good and bad... emotion... raw unadulterated emotion.