Yesterday I was out on a limb.. today I am out on the ledge!

Really this "Business Soul Session" class needed to come with a warning:


Warning: This "Business Soul Sessions Class" is going to bring up every fear of success that you have ever had.

I woke up this morning to a dream about an unhealthy pattern that has been repeated in the endings of my relationships with men. There was the pattern of being left to see more than one other woman and the pattern of going back to an old girlfriend. I was distraught,  but I had to go hang art at a cafe.  I was on the verge of tears and customers of the cafe kept coming up to me and asking if I was the artist and saying they loved my work. I even made a sell before I got the art on the wall!  Oddly enough I wasn't feeling wonderful or talented. My core thought was:


"This doesn't feel right. This is not who I am,  I was supposed to be a housewife, a mother, a caretaker and that is who I wanted to be. I was forced into this world of trying to make a living. All I ever wanted was to be the support for my family!"

WOW! That thought had been burning a hole in my subconscious for 30 years! I am still mad that my ex-husband had affairs, did drugs and I had to divorce him and then got blamed when I left him. Now, I just broke up with Tony, hoping he would make some positive changes, instead he started seeing two women. Both from his past. It was all I could do to maintain my composer to get the art on the wall and run to the car and start crying.

Today in my online art business class I am supposed to be thinking about the "who" of my business. If you are paying close enough attention all the answers will appear and sometimes it really hurts to find out you have been surrounding yourself with all the wrong who's. I had a conversation with Tony while I was in the car and realized that he is only playing his part of teaching me that very hard lesson. I asked for the lesson, I got it. He was merely playing his part.

I went to therapy this evening. I told my therapist about the unhealthy pattern. I normally don't share my realization that come in therapy but I think this is so important and deep that everyone needs to know.  My therapist asked how the repeated pattern made me feel. Of course she did, that is what therapists do! I said "It makes me feel that I am not enough. Men leave me for other women. Sometime they leave me for more than one other women because I am not enough." Her reply was "I am going to say something that is going to push some buttons, you aren't going to want to hear it but here it is. Have you ever thought that maybe THEY aren't enough. You were talking about being the caretaker and trying to nurture them to be better, to raise their frequency to match yours. Look back on these relationships. They were able to keep up for a while, but it is hard work. They left to go back into old habits that are easy." 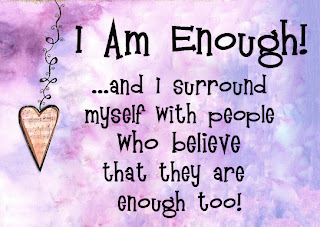 Talk about a LIGHT BULB MOMENT!

This is huge. Really huge. On my way home from therapy I was seeing those ending of relationships in a whole new light. I really feel that something very deep has been shaken loose today and new doors are going to open.
Posted by Christina Fajardo at Monday, January 23, 2012